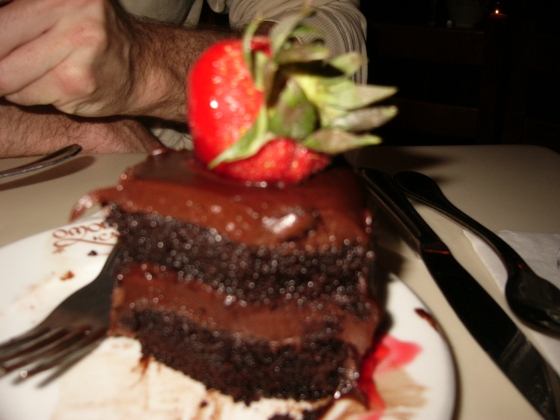 After the Oddbody show last night (which was great! more on that later…), I grabbed a drink with Faryn, then hung out with friends at the bar, which was really nice. Then! I took a late night trip to Astoria (in Queens) to hang out with Daniel. It was fun and impulsive because I rarely stay out very late on Friday nights.

We got midnight snacks at a nearby cafe called Omonia. Since I used to live with Daniel in Astoria, I’ve seen this cafe go through many iterations and many menu changes over the years. As skeptical as I’ve been in the past to order anything besides dessert from this place (They do boast an incredible variety of Greek sweets.), the food I’ve tried there recently has been pretty tasty, including a Spanakopita that hit the mark.

Last night Daniel ordered this divine piece of chocolate cake, of which I had only two bites, but that was all I needed because it was rich and heavenly.

I'm Jen Curran. I'm 31. I'm a comedian, writer and actor living in Brooklyn with my sweet boyfriend and our two cats. I'm also the Managing Director at the Peoples Improv Theater in NYC. In 2009 I quit my boring desk job to follow my bliss. This is my story.

All photographs on this site were taken by Jen Curran unless otherwise noted.